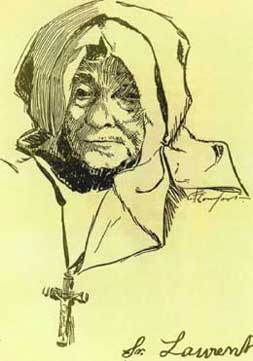 (above: a sketch of Sister Flavie)

The story of the Flavie-Laurent Centre takes place over many years and consists of various stages.

Flavie Laurent was born in Montreal in 1832. At the age of 16, she enters the order of the Sisters of Charity of Montreal (Grey Nuns) and two years later, in 1850, she arrives in Manitoba. For the next 75 years she is totally dedicated to helping the poor in Manitoba. At her death in 1925, at the age of 93, we find the following testimony to her work in the French newspaper La Liberté :

“Sister Laurent will be forever remembered by the parishioners of St. Boniface… she was a friend to the poor, a consoler to the afflicted, a support to the weak… she was not indifferent to the suffering of others… no one knows and no one will ever know the magnitude of the works of mercy accomplished by this noble and distinguished woman in the tradition of charity and devotion exemplified by the Grey Nuns in this country.”

March 26, 1979 marks the official opening of Centre Laurent at 380 Taché Avenue in St. Boniface. Sister Marie Tougas and Sister Germaine Marcoux are named the administrators of the Centre. It is important to note that the Grey Nuns’ Provincial House had served for many years as an occasional distribution centre for clothes but a lack of space had made this task difficult. In 1979, Centre Laurent was able to assist 1,400 poor persons.

Centre Laurent moves its operations to the former “Jardin d’enfance” directed by Mrs. Ragot at 144 Bertrand Street. Father Louis-Philippe Jean, Vicar at St. Boniface Cathedral Parish, presides over the official blessing of the new building on April 1, 1985 in the company of Sister Marie Bonin, Provincial Superior, Sister Céline Vermette, Assistant to the Provincial Superior, and Sister Genevieve Rocan, the new Director of the Centre. A total of 14, 893 poor persons receive assistance at the Centre in 1984 and more than 15, 000 in 1986. The Centre closed on September 29, 1989 for numerous reasons including a lack of space.

A group of lay persons (Marie-Hélène Duval, Gisèle Beaudry, Paul Ayotte, Ghislaine Gauthier, Jeannette Champagne and a few others) from the St. Boniface Cathedral Parish establish a Storefront Ministry Project with the goal of continuing the work of Centre Laurent. This new project starts its operations in October 2001 under the name of Centre Flavie-Laurent and is situated on Provencher Boulevard. Marie-Hélène Duval and Jeannette Champagne are in charge of the project. 340 families receive assistance from the Centre in 2004.

Centre Flavie-Laurent receives a grant from the Federal Government which is to be used for the purchase of a building and the hiring of a full-time director. The Centre is now under the sponsorship of the Catholic Health Corporation of Manitoba. Gilbert Vielfaure is hired as the new director in August 2005 and a building situated at 164 Marion Street is purchased in September 2005. All services are now located in the newly purchased building. Centre Flavie-Laurent is incorporated and is registered as a charitable organization.

The CFLC completed a 900 square feet addition on the east side of the existing building at a cost of $180,000.

The blessing and official opening of our new location at 450 Provencher Blvd (Wpg, MB)  About 150 people were present, including:

September 1, 2022 Centre Flavie opens its brand new 13,000 sf building at 301 Archibald street.  The new Centre will offer the additonal services of a boutique and community gardens.  The project cost was $4.2 million dollars and at the time of opening was almost entirely paid for.